It’s been said that everyone in the world has a double somewhere. Many cultures have ancient legends of doppelgangers, or look-alikes, and the “evil twin” is a popular concept in modern fiction. With almost 7 billion people on the planet, the possibility exists that there is someone else out there who looks just like you and sounds just like you. Identical in every way. What would you do if you met that person face-to-face? Dave and Catherine Wojtowicz are on vacation in the sleepy little town of Casco Cove, an area known for its artist community, fish boils and cherry orchards. They have never been there before, so why does everyone they meet seem to recognize Catherine? And who is the woman who runs the antique store?

Casco Cove is available at Amazon.com in paperback or for your Kindle.

It’s 1987, and three high school friends get more than they bargained for when a former classmate involves them in a plan to hijack a local television broadcast and put their own show on the air. Soon they have the TV station, the police, the FBI, the FCC, and a band of Soviet spies trying to find out who they are as they work to decipher a message hidden inside the disrupted TV signal.

The Hidden Message is available at Amazon.com in paperback or for your Kindle.

What would you do if you could control your dreams, and you could use them to travel back in time and space to watch real events as they happened? Would you go back to watch history unfold? Relive experiences from your past? Try to solve some of the great mysteries of our time?Set in 1983, The Sleep Detectives is the story of Tony, a grocery store produce clerk who has this uncanny ability. He’s been using it just for fun — to see his favorite bands play, to find items he lost — but now he and his friends are figuring out how to use his gift to help people, and maybe solve a crime or two along the way.

The Sleep Detectives is available at Amazon.com in paperback or for your Kindle.

It’s March 1926, and the usually sleepy town of Odagamig, Wisconsin is a beehive of activity. The year-long construction of the Elysium Theater is almost finished, just in time to host the Midwest premiere of The Black Pirate, the new feature film starring Douglas Fairbanks. Politicians, reporters and other dignitaries, including Fairbanks himself, have converged on the town for the opening.

But not everyone is happy that Odagamig now has the premier movie palace in northeastern Wisconsin. Theater owners in Green Bay and Oshkosh are upset that a rival chain from Chicago is moving into their area and overshadowing their own modest facilities. And the workers who are putting the finishing touches on the new facility have reported strange goings-on in the cavernous auditorium. Some even think the building is haunted.

The Opening of the Elysium is available at Amazon.com in paperback or for your Kindle. 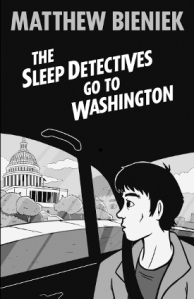 Tony Michalik has been helping the Acme Detective Agency solve the coldest of cold cases with his uncanny ability to see real events in his dreams. Now the CIA is asking him to come to the nation’s capital for evaluation. How much does the government know about his talents? And who are the shadowy figures following him all the way to Washington? Meanwhile, a mysterious company is taking extraordinary measures to attract Tony’s attention, and others are seeking his services. Are Tony and his friends in danger?

The Sleep Detectives Go To Washington is available at Amazon.com in paperback or for your Kindle. 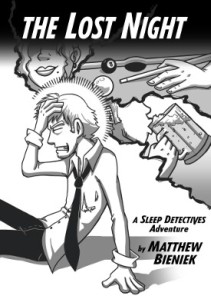 A Sleep Detectives novelette! When Danny accepted a new assignment at another grocery store, located in one of the poorest neighborhoods in the city, he never expected to have to deal with an uninhibited co-worker, a belligerent trainee, and an evening of celebration that he has no recollection of. With the help of his friend Tony, Danny must piece together the events of his lost night, and in the process, determine if one of his crew is a killer.

The Lost Night is available at Amazon.com for your Kindle.

Another Sleep Detectives novelette! Danny is settling in at his new store when a co-worker asks him to find her missing sister. He enlists the help of his friend Dom from the Acme Detective Agency to track down the lost girl, then must deal with neighborhood gang members who don’t like him digging into their affairs.

The Lost Girl is available at Amazon.com for your Kindle. 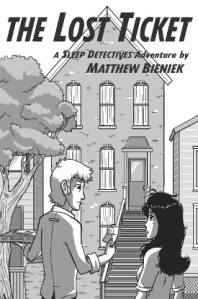 Yet another Sleep Detectives novelette! Danny and Izzy are on the trail of a winning lottery ticket that was stolen from an elderly couple in the neighborhood, a quest that takes them from the seedy side of Riverdale to the heart of Chicago’s Division Street.

The Lost Ticket is available at Amazon.com for your Kindle.

Kristina “Kiki” Hansen and Bridget Doyle fell in love with aviation while in college. After graduation, they obtained one of the thousands of airplanes left over from the First World War and taught themselves the kinds of stunts that thrilled audiences all across the country, and that had made barnstorming one of the most popular forms of entertainment during the Roaring Twenties.

But by the middle of the decade, the U.S. Post Office began to hire private airlines to deliver mail, and the money involved in such contracts made certain undesirable elements of society take notice. Suddenly, the risks these daredevils faced were not only in the skies.

Follow our two intrepid aviatrices as they face action and adventure in this tale, set in the early days of aviation, and written as a homage to the cliffhanger serials of the first half of the twentieth century.

Barnstormers Book One is available at Amazon.com in paperback or for your Kindle.

Kristina “Kiki” Hansen and Bridget Doyle, undercover ICPO agents, continue their barnstorming tour across the country as they land their red-and-yellow Curtiss Jenny biplane in Chicago, where they have been hired to perform some air stunts over Riverview, a popular amusement park on the north side of the city.

But in 1925, Chicago was a dangerous place, where organized crime ran rampant, and several street gangs with their ruthless leaders fought to control the streets of the city. Add to that the activities of the syndicate run by the mysterious Belgian, and Bridget and Kiki will face more danger than ever before!

The action then moves to St. Louis, where the ladies join the prestigious Marie Meyer Flying Circus, only to again run afoul of the Belgian and his henchmen.Written in the style of the cliffhanger serials that thrilled thousands in the early days of cinema, this volume finds our two intrepid aviatrices facing phony cops and real bullets as they travel across the country in search of adventure.

Barnstormers Book Two is available at Amazon.com in paperback or Kindle.